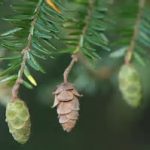 Campaign to Save the Hemlocks

Walking through the Gorge, many say is like visiting “the forest primeval” — deep, dark and old, more like the venerable redwood forests of the west than the second-growth forests so common in the east. Visitors get the feeling they are stepping back in time and getting a rare glimpse of what it was like when Native Americans lived on this land. That history is still evident in its sheer granite cliffs (once rock shelters for Chief Mayanos and his tribe), its rushing river, and its towering old-growth hemlocks.

HEMLOCKS CAN LIVE AS LONG AS 1,000 YEARS

The Mianus River Gorge was first recognized and preserved as the result of the work of scientists and continued management of this important resource is based on science as well. Many of the Gorge’s ongoing research projects have helped influence preserve management and keep the old-growth forest healthy. Our scientists continue to develop a better understanding of its soils, identify and try to remove significant threats, and provide adaptive management as research adds new knowledge that is applied to land management.

Eastern hemlock trees (Tsuga canadensis) are some of the largest and oldest trees in the Mianus River Gorge. These majestic trees are the principal component of the 100 acres of old-growth forest and were the major inspiration for the protection of that first parcel of land in the Gorge by our founders.

This rare community, with its rich soils intertwined with mycorrhizal fungi, is home to abundant plants and animals, with some species found only in this forest. It is a vestige of the old-growth forest that once covered the entire eastern United States. This historical treasure has survived since before Europeans first set foot on these grounds, but it is now faced with a threat that even it cannot weather. The old-growth forest is under attack from a non-native insect called the hemlock woolly adelgid (Adelges tsugae). Without intervention, these 400-year-old hemlocks will almost certainly be gone in the next few years and the natural community they support will vanish along with them.

Since its arrival from Eastern Asia in the 1920s, the hemlock woolly adelgid has rapidly expanded from the southeastern United States to New York and New England. This insect, easily dispersed by birds and wind, has already destroyed most of the hemlock forests it has colonized. Fortunately, at the Gorge, the age and favorable site conditions have kept the hemlocks alive despite the presence of the wooly adelgid. But in the last few years the continued infestation is starting to take its toll. Trees already stressed from last summer’s record drought are beginning to decline at an alarming rate, especially on the eastern slopes of the Gorge where some of the oldest trees reside. Virgin trees in excess of 400 years old are at significant risk of being lost before their time due to this threat.

Hemlocks play an important role by providing deep shade along the Mianus River, maintaining cool micro-climates critical to the survival of brook trout and other cold water species. Their unique tolerance for limited light allows them to form dense canopies with cool damp habitats, or microclimates, where the understory is much different than those of more open, deciduous forests. The well-developed soils are reservoirs for rare wildflowers and the large, ancient trees are home to obligate species found only in this unique old-growth community. Over 100 species of birds and over 30 species of mammals are associated with the Gorge’s hemlock forests. Not only is the forest a welcome habitat for wildlife, but it keeps the river clean for the 130,000 people in Stamford and Greenwich, CT, and Portchester, Rye, and Rye Brook, NY, who depend on it for their drinking water supply. From the point where the Mianus River enters the Mianus River Gorge hemlock forest to where it runs into the Bargh Reservoir, its water temperature drops and its purity increases significantly. The Gorge ecosystem, anchored by its ancient hemlocks, is a natural filter, air conditioner and water purifier, all in one.

The eastern slopes of the Gorge are some of the most diverse ecosystems in the region with hundreds of species of plants and animals. As the older hemlock component of this forest dies, the canopy opens and light penetrates the forest floor. Soil temperatures increase, leading to a drying of the soil, further stressing the hemlocks. Soil respiration also declines as tree roots die and less nitrogen is taken up. Increased soil nitrogen may potentially lead to increased nitrogen runoff into the Mianus River drinking water supply.

With declining hemlocks, also comes more open land for colonization by invasive species as well as a change toward a less diverse forest composition. Deer resistant species like black birch, American beech and red maple begin to dominate, taking the place of hemlocks and other important species. Many of the forests in the Gorge are already composed primarily of these species due to past agricultural and grazing practices. The loss of the old-growth hemlocks would only further reduce habitat diversity and escalate the decline of rare species that depend on this forest ecosystem. It is imperative to prevent the demise of this rare, diverse forest and protect its contained extraordinary genetic diversity. Saving the old-growth hemlocks will give Gorge staff time to cultivate a new generation of hemlocks that can be used to add diversity to the Gorge and push them toward healthier, more diverse mixed forests as they age.

IF THESE TREES SUCCUMB, THEIR DISAPPEARANCE WOULD TRIGGER AN IRREVERSIBLE CASCADE EFFECT THAT WOULD TRAVEL FROM TREES TO SHRUBS TO SOILS AND WOULD CHANGE THIS HISTORIC OLD-GROWTH FOREST FOREVER.

For the last 20 years, the Gorge staff has worked to protect the old-growth hemlock forest, and has continuously adjusted management strategies as new proven developments in adelgid control have emerged. In 2002, the biological control beetle (Sasajiscymnus tsugae) was released at the Gorge and evaluated for many years. Although initially shown to control adelgid populations, this beetle unfortunately had little effect at the Gorge and others noted similar poor results in forested settings. In the meantime, to stem the recent accelerated decline and to save our hemlocks now, we have begun a regimen recommended by scientists at Cornell Cooperative Extension. This intervention program is being undertaken only after careful consideration and with thorough vetting of the methodology for safety and scientific appropriateness. It has been implemented with significant success in similarly threatened southeastern forests.

The Cornell Cooperative Extension regimen begins with directly treating our old-growth hemlocks to eliminate hemlock woolly adelgid and hemlock scale, a second non-native pest. This two-year campaign aims to treat a large portion of the hemlocks with a combination of two insecticides. The combination of both together makes for a quicker response, kills both primary threats, and lasts longer. The primary insecticide, Imidacloprid, is the active ingredient found in tick and flea medication for dogs and cats and has little impact on vertebrates at these dosages. Imidacloprid has been used successfully in soil treatments in many locations including on forests in Smoky Mountain National Park where they have over 800 acres of old-growth hemlock forest and have treated 200,000 trees with this method.

MRG will use a technique known as basal bark spraying, as opposed to root drenching or injections, which prevents runoff and soil contamination by staying within the tree to target adelgids without killing beneficial predators.

To ensure complete effectiveness, MRG will maintain a schedule of repeated basal bark spraying five, six, and seven years after the initial treatment, covering one third of the hemlocks in each session. Mianus River Gorge will create and contribute to a Board of Trustees-designated “hemlock fund” to complete this plan.

At the same time, and to ultimately replace the spraying regimen, the Gorge will monitor the development and availability of new biological control agents for hemlock woolly adelgid and hemlock scale. A new beetle, and potential long-term adelgid predator, is anticipated in 2018 and will be evaluated for possible introduction into the Gorge hemlock ecosystem.

2. MANAGE THE HABITAT TO KEEP HEMLOCKS HEALTHIER AND REBUILD THE ECOSYSTEM

Hemlocks are a “foundation” species, meaning the surrounding ecosystem relies on them to exist. They also are essential in the Gorge to hold the slopes and prevent them from eroding into the river.

In tandem with directly treating the hemlocks, MRG will restore the understory vegetation that keeps the ground moist and is critical to the health of the hemlocks, especially their roots and the mycorrhizal fungi in the soil they depend on. We will work to eliminate Japanese barberry and garlic mustard, two non-native invasive species, from the hemlock slopes of the Gorge. Both these species are somewhat allelopathic, meaning they poison the ground around them to eliminate their competition. This leads to decreased plant diversity, opens the ground to drying out, and harms the mycorrhizal fungi community. By eliminating these invasive species, we can reestablish the health of the forest floor and increase the likelihood of healthy hemlocks into the future.

MRG will work to replant areas on slopes damaged by storms and slides to prevent more non-native invasives and protect the integrity of the hemlock slopes. We also will replant hemlocks and tulip poplar on open slopes to restore the canopy. Tulip poplar (Liriodendron tulipfera), a fast-growing species, will restore the canopy quickly and the hemlocks will follow. MRG will also use its recently created restoration garden and enclosures to act as sources of seed and plants to be used in restoration efforts.

At the same time, we will continue to protect the rarest of species from hungry deer until we can reduce the deer population to a level that is better balanced with the Gorge’s food resources.

White-tailed deer are referred to as an ecosystem engineer and their browsing activity dramatically affects forest regeneration and species diversity.

To increase the regeneration of new hemlocks and repair the critical herbaceous layer, Gorge staff will continue to reduce invasive vines, but also scale up the deer management program. The Gorge’s ongoing deer management activities have shown very positive results so far, but increased efforts will be needed to further reduce population numbers to a sustainable level.

4. IMPROVE THE HEALTH & BUFFERING ABILITY OF THE YOUNGER FOREST