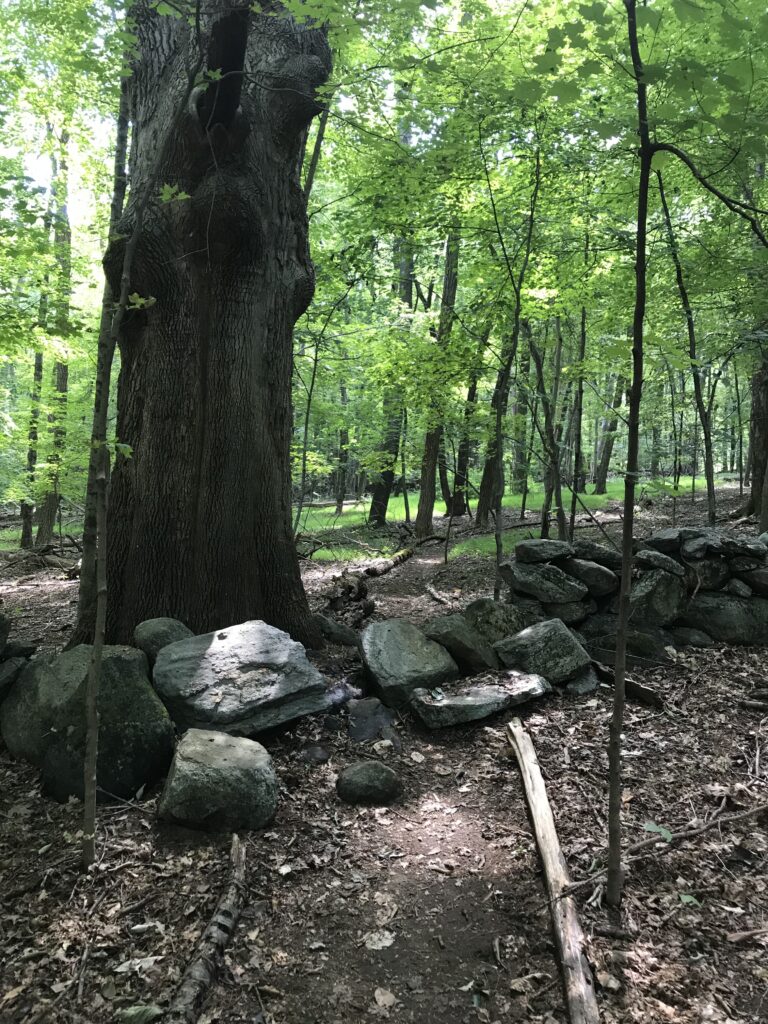 The NYS DEC and Westchester Community Foundation each awarded a grant to Mianus River Gorge to help improve the health and buffering ability of the younger, post-agricultural forest that surrounds the Mianus River Gorge old-growth forest.

Mianus River Gorge Preserve (MRGP) is a linear preserve and past agricultural activities came very close to the core old-growth forest. As pasturelands and farm fields were abandoned, they reverted to forest, but their subsequent development was influenced by a growing deer population and changes in the soils associated with past activities. If we are to keep our old-growth forest healthy, we need healthy adjacent second-growth forests to further buffer the fragile core from human-related activities.

Dating back to Colonial times, over 50 old paddocks delineated by stone walls border the old-growth forest in the Mianus River Gorge Preserve. Today, these former paddocks contain the younger trees that have grown from the soil that once supported the agricultural activities of this region. Most of the fields at MRGP were reverting to forest at the same time as the deer population was growing exponentially. The heavy browsing by white-tailed deer combined with the disturbed soils in these abandoned agricultural fields led to the even-aged, newer forests lacking diversity and now dominated by only a few species. As the short-lived species fall down, the canopy opens and allows light to penetrate the forest floor. Normally this would be a prime area for regrowth and increased diversity, but deer populations again influence the process in this suburban / exurban forests. Due to heavy pressure by deer on native herbaceous species, the understory instead becomes dominated by non-native invasives (deer prefer native species and, at the same time, non-native species like the disturbed soils of the old farm fields).

Over time, this process resulted in a forest that lacks diversity, is missing critical forest layering, lacks sufficient climax species that are important long-term food and habitat sources, and is dominated by a variety of non-native species. Overall, this forest composition is a very poor buffer for the core old-growth forest in MRGP and threatens the long-term viability of this unique resource.

An uneven-aged forest that will provide the habitat and food resources for wildlife diversity in a suburban / exurban area where deer management is difficult (only bow hunting is permitted in Westchester County) is the desired future condition of the forest stand. Located in a transition zone between typical southern and northern forests, MRG also hopes to establish an ecosystem that is adaptable to changes in climate by creating forest species diversity including southern climax species that have continued to move north.

The ultimate goal of this project is to develop a healthy stand density and diversity within the Mianus River Gorge Preserve that will improve conditions for ground-nesting birds and other wildlife, and buffer the older forest.

Westchester County is at the southern-most edge of the normal range for many climax species such as sugar maple and at the northern-most edge of southern species such as some species of oak and yellow poplar. The impact of a warming climate will undoubtedly affect these trees in the future, but improving the health of our existing forest may make it possible to buffer the MRG forest from future climate change.

With input from NYS DEC foresters, Mianus River Gorge will apply a combination of professionally accepted practices that work in parallel to protect and enhance the development of self-sustaining post-agricultural upland forest in the Mianus River Gorge Preserve. The plan focuses on reducing herbivory, removing invasive species, and planting a selection of trees that will tolerate advancing climate change to provide stability to the forest, food (e.g., acorns, hickory nuts) for deer, turkeys, and other bird species, and improve the health and buffering ability by creating a more uneven-aged forest.

The work in the forest builds on MRG’s previous environmental work funded by Westchester Community Foundation to save the hemlock trees from devastation by the hemlock woolly adelgid pest and re-introduce an array of native wildflowers that were once common in the Preserve. 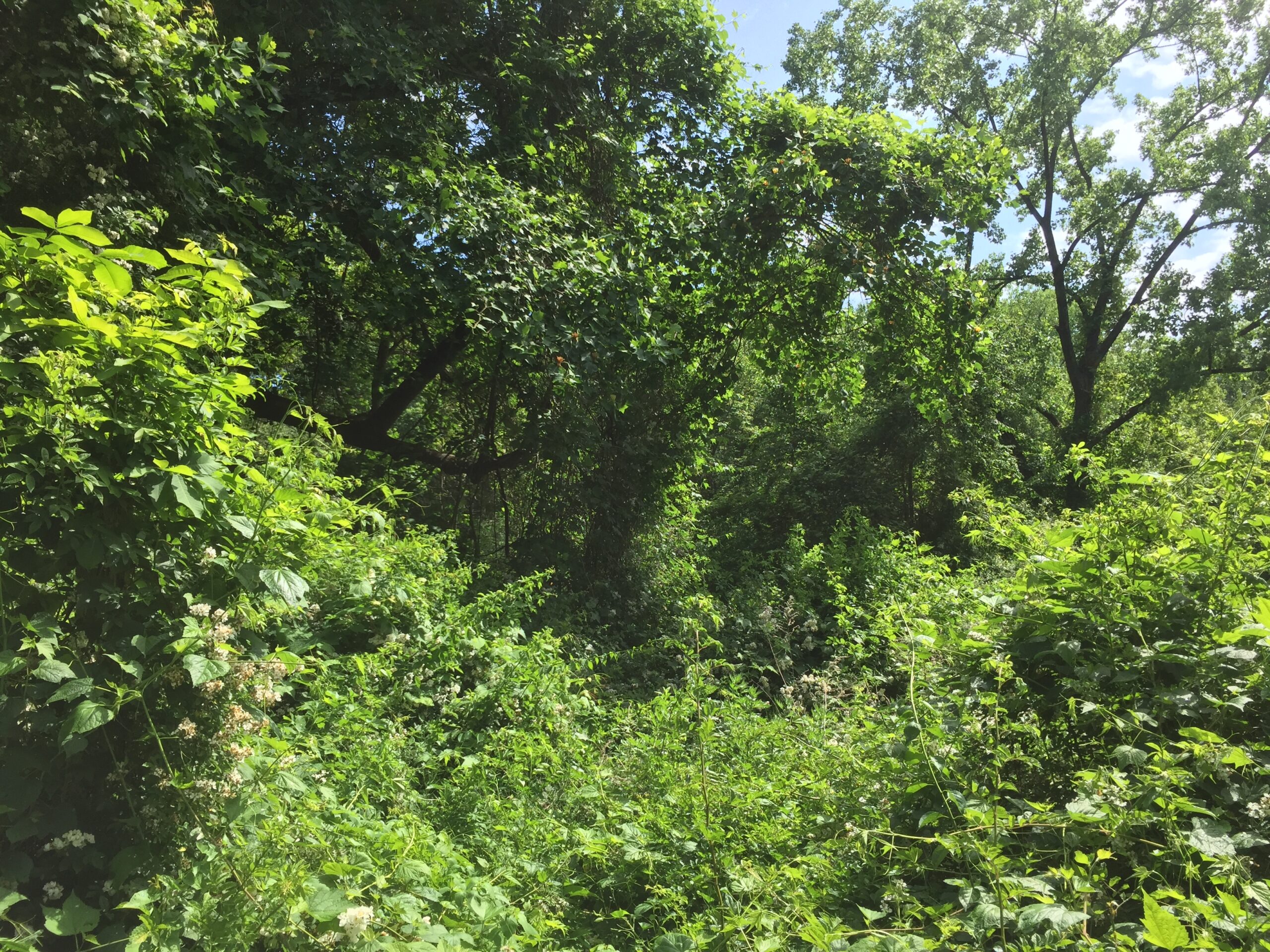 Riparian wetlands help dissipate floodwaters, recharge groundwater supplies, filter out pollution, provide fish and wildlife habitat, and sustain the health of downstream water sources. Runoff, pollution, and development contribute to wetland degradation. The functionality of wetlands within the Mianus River Watershed contributes to the overall health of the entire water system, an important drinking water source for many. The Mianus River Watershed comprises over 30 major wetlands, each with a varying level of health and functionality based on a number of contributing variables.

Mianus River Gorge has the expertise to scientifically evaluate the health and functionality of a wetland system, identify threats, and determine a course of action. For example, if a wetland is threatened due to road runoff, yet the diversity of its native species is intact, we believe that if we eliminate the threat the wetland has the potential to repair itself.  Conversely, if invasive species have taken over and changed the structure of the wetlands, we believe the damage is irreparable without a dedicated restoration project.

MRG successfully executed a significant restoration project, thus completing the cycle from initial assessment and evaluation, to identification of threats, determination of course of action, and finally to completed restoration.  Restoration of the Lockwood Pond II serves as a model for other compromised wetlands in the Mianus River Watershed that would benefit from restoration. It also demonstrates to municipalities that restoration is possible to improve the functionality and health of wetlands. 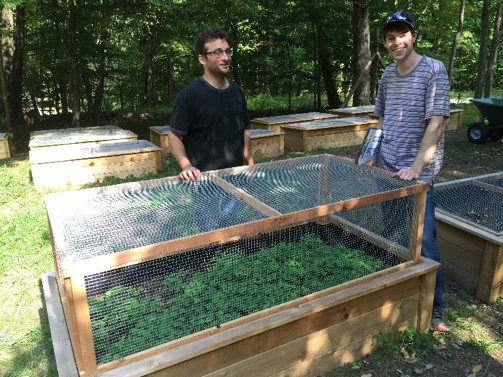 Many wildflower and herbaceous plant species common in the Gorge 30 years ago are now very rare. Deer, invasive species, and illegal collecting have eliminated some species. Restoration of these species could have broad implications for similar activities elsewhere and prove valuable in helping buffer ecological communities, particularly on steep slopes, from the effects of climate change.

MRG staff and a local scout troop built 24 3’X6′ raised beds and one larger wetland bed to plant with seeds and/or rhizomes locally collected from sustainable sources. All beds are protected from predators and represent nearly 30 different species to date. Many species that were planted several years ago are now bearing seed that we can use to plant in the Preserve. In 2018 we planted back into the Preserve over 2,456 seeds representing four species. In addition to seeds, another 40+ mature plants representing 5 different species were planted in the Preserve. We also collected thousands of seeds from other local wild and sustainable sources to plant back into our garden beds (to increase the genetic diversity) and to use for restoration projects.

Each year, as more plants mature, we will have more seed to use for restoration activities. MRG protects new herbaceous communities by erecting unobtrusive fencing and in its deer exclosures; rapid response and control of non-native invasive species; and MRG’s ongoing Deer Management Program that has been effective in the reduction of the local deer population.